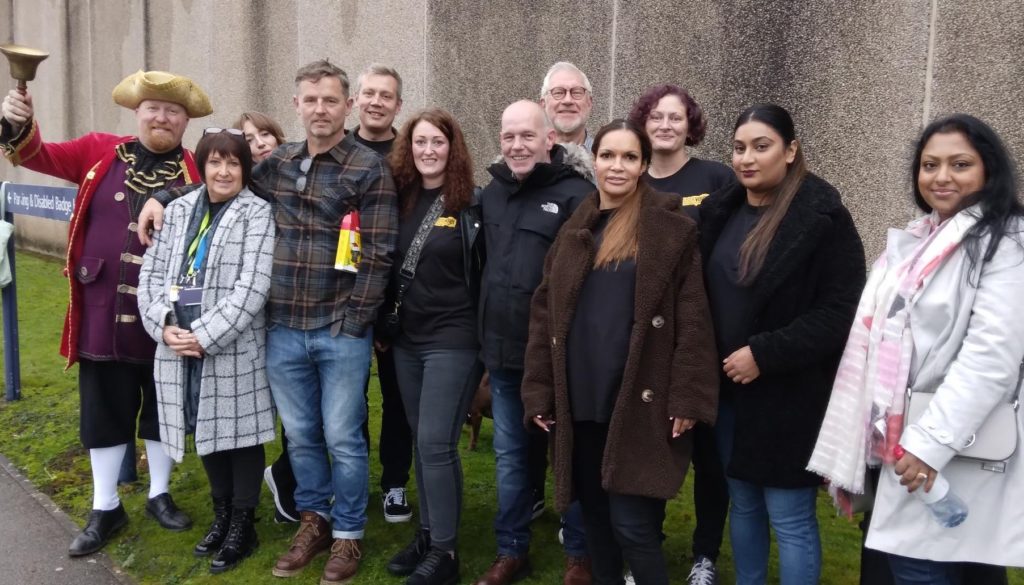 The votes were counted and by 1pm we had a winner in the Forest Bank Prison Council elections. The Why Not Party—who campaigned for improvements to prison visits, more nutritious food, and better access to the gym romped home with 53% of the vote, taking 13 seats on the Council, whose work to affect small changes within the prison will make a huge difference starts here.

In their speech the winning party said, ‘We’re not here to make complaints but to fight for the chance to make change’.

There was a buzz in the air of the visits room at Forest Bank on the morning of the election. Despite a difficult 18 months due to COVID restrictions, in just four short weeks the Forest Bank residents with support from the User Voice engagement team had formed three parties, prepared their manifestos, campaigned around the wings and organised an event to elect a new Council to represent the voices of the men behind the door. By 10.30am on election day, the votes were in and of 1224 men, 804 (66%) voted in the election alongside 100 (20%) out of 500 staff.

For the first time ever, Prison Council members could invite one family member to come along for the event, adding to the general air of excitement in the room.

One partner told us, ‘I was surprised to hear that he’d got involved with the Prison Council, I think it’s been really good for him, I hope they can make some changes’.

Inclusion on the day gave the men’s partners a sense of pride in their loved ones, as well as an extra opportunity to spend time with them; to have a hug, eat lunch together and to see what it is their partners have been doing.

The three parties, the Access Party, Basic Rights Party and Why Not Party all had similar manifestos focused on visits, nutrition, and mental and physical wellbeing. Coming out of Covid lockdown levels, morale is low, mental health is suffering and just a few minor changes in some of these areas could have a massive impact on the lives of the residents, their families, and the prison staff.

For all the men, better visits were a top priority, being able to see their kids more often and making the experience better for their families was by far the most important thing for them all.

The Why Not Party spokesman said, ‘Visits can be a very negative experience for our kids and partners, some people can’t have all their kids in to visit at once because of the three-kid limit.

‘Small changes could improve the whole experience for us and our families’.

The Basic Rights Party echoed the sentiment simply saying, ‘We need improved visiting, more certainty around visits, exact times for our visits and to know they won’t be cut short’.

The wives and partners of all the men involved in the election said the same, ‘We need more visits. One hour a month isn’t enough. We’ve had video calls during Covid lockdown but it’s not the same as face-to-face and especially for such a long time’.

Speeches were a highlight of the day. Speaking in public is a nerve-wracking experience and speaking to a large group is hard. But their ability to stand up, raise their voices and speak about their party ambitions for the Council is at the very heart of what User Voice is all about – empowering people and giving a voice to those who don’t have it.

Once the votes were counted, the Why Not Party had the majority, taking 13 seats, with both the Access and Basic Rights Party taking 6 seats each on the Council – ensuring as many voices as possible will be heard around the table.

Ian Whiteside, Prison Director told the assembled audience: “I look forward to working with the council to implement their suggestions, especially those that will improve the prison environment for both residents and visiting families”.

The day ended with the User Voice Town Cryer (in full regalia) doing a round of the wings to announce the results to the rest of the residents of Forest Bank.

And with that, the election was complete.

Now the hard work begins, with the first Forest Bank Council meeting scheduled for early December and a lot to be discussed.

‘I want to speak for the people who can’t speak for themselves. Give a voice to the other guys behind the door and try to make small changes that will make a difference to everyone’. Access Party Spokesperson

Why Have We Banned Research In Prisons?